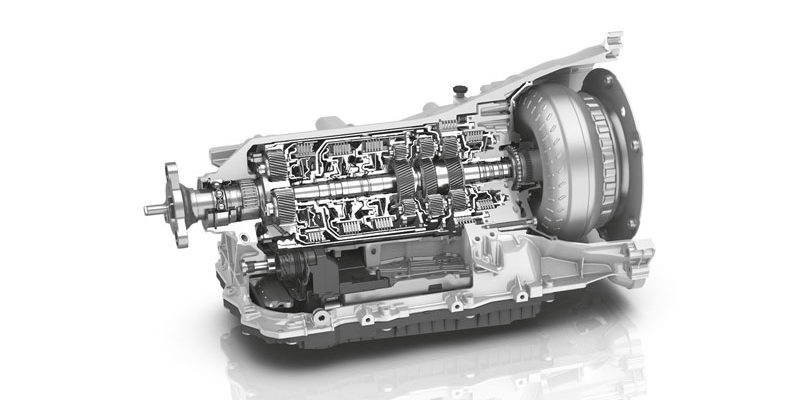 The 8HP45RE was designed especially for Chrysler’s V6 powered models. Changes over the standard ZF 8-speed include extra friction plates in the clutch packs and a deeper fluid pan.

All-wheel-drive compatibility was another hurdle that ZF tackled for the 8HP. Again, crediting the modular design, there are three variations of all-wheel-drive systems that the 8HP can handle. First up is a standard transfer case bolted to the transmission’s tail like the units typically found in SUVs.

Second, the transmission case can include the front axle drive and center differential, making it one complete unit. That style is in use in several Volkswagen Audi products. And last but not least is somewhat of a hybrid of the two previous systems for vehicles that utilize a “torque-on-demand” system, requiring front axle drive under specific circumstances only.

ZF prepared for an electric evolution, too, creating four different hybrid systems compatible with the 8HP. At the mildest is a 15kw electric motor installed in place of the torque converter. It can recharge itself under braking, provide an extra 200 NM of torque, assist with the stop/start function, and further reduce fuel consumption.

At the wildest, a 100kw electric motor is fitted to the front of the gearbox. It is substantially larger and heavier than the 15kw unit but provides more upside. Rather than just assisting the engine, this motor can be used for fully electric operation or to drive the front axle on a normally rear-wheel-drive model while also providing double the torque figure of the 15kw unit.

ZF understood while designing the 8-speed that different manufacturers had different requirements. To appeal to as many manufacturers as possible, ZF made the 8HP modular, allowing for different options to be installed without a major fuss. For vehicles with a stop/start function, ZF created their hydraulic impulse oil storage system, or HIS.

Traditional stop/start functions used an auxiliary pump to pressurize the small amount of oil needed to resume drive function quickly. However, a HIS-equipped 8-speed does not need an external pump; all the components required to supply that 100 centiliters of fluid are within the transmission.

The ZF 8HP45 is not a dual-clutch transmission, but rather a traditional torque-converter automatic. However, the lightweight internal components reduced internal drag, and the advanced valve body allows the 8HP to shift nearly as fast as a DCT but without the complex and expensive design. The 8HP is cheaper to produce, cheaper to maintain, easier to modify for greater power, and is just as fuel-efficient.

If you have any questions about the ZF 8-Speed transmission, or if you would like to see something added to this guide, leave your thoughts in the comments section below.

Is the zf 8-speed reliable?

We’re asked this question a lot, so we’d be remiss not to address it directly. ZF had plenty of data to use from their previous transmissions, the 5HP and 6HP, when designing the 8HP. Consequently, there is hardly anything to worry about when it comes to reliability and longevity.

In stock applications, the ZF 8HP is reliable as it gets. Modified vehicles running stock transmission internals are reportedly very stout. The 8HP45 is no pushover when it comes to increased torque and horsepower demands. ZF seemingly undersold the torque limit in the name of reliability and longevity, allowing owners to take advantage of its strength. However, there is a finite torque limit for the 8HP45, and it gets rather expensive if you push right through it.

Further savings potential of up to three percent Focus of developers: Reducing drag torques and engine speed Modular transmission construction kit predestined for downsizing engines Higher savings potential in terms of consumption and CO2 combined with increased ride comfort and dynamics: The successful 8HP 8-speed automatic transmission has been characterized by these advantages since the … Continued

Higher savings potential in terms of consumption and CO2 combined with increased ride comfort and dynamics: The successful 8HP 8-speed automatic transmission has been characterized by these advantages since the start of production in 2009. All of the advantages are now even more pronounced in the second generation that initially is in volume production since July 2022 in the BMW 520d. The new 8HP offers comprehensive further developments that range from lower drag torques and higher spread through to an improved torsional vibration absorption. Gradually, the new 8-speed automatic transmissions from ZF are being deployed in further models and with many automotive manufacturers worldwide.

“Our longstanding customer BMW is impressively demonstrating how to successfully make vehicles more efficient yet more dynamic at the same time,” says Dr. Jürgen Greiner, head of Passenger Car Transmission Development at ZF Friedrichshafen AG. “Therefore, we are particularly delighted that the premium manufacturer is the first OEM to rely on the second generation of our 8-speed automatic transmission that, when it comes to these criteria, is also groundbreaking. Through many further developments, we have made the 8HP significantly even more efficient compared to the predecessor transmission – up to three percent in total”.

The new 8HP entered volume production at the start of July in the BMW 520d as the 8HP50 version that is designed for torques of up to 500 Nm. In the future, the 8HP75 will be part of the ZF portfolio for drives with even higher torque of up to 750 Nm.

Gradually, all further automotive manufacturers to whom ZF has already supplied the 8HP in over 1 000 vehicle applications will utilize the latest generation of the 8-speed automatic transmission.

Optimized for downsizing and downspeeding

The new 8-speed automatic transmission combines many technological advances: Above all, ZF has further optimized the new transmission generation for the requirements of modern engine technology. This is due to the fact that, in order to meet the forthcoming CO2 emission specifications without losses in terms of torque and performance, there are two central trends when it comes to combustion units: Downsizing, which means turbocharged engines with fewer cylinders and less engine displacement and downspeeding, which is the reduction of the engine speeds combined with a maximum torque that is applied at a very early stage.

It is the reduction of the speeds in particular that demands transmissions with a higher spread which is the reason why ZF has increased it from 7.0 to 7.8 on the new 8HP by means of optimized gearsets. “This measure alone reduces the speed across all gears by 50 revolutions per minute on average and reduces fuel consumption by almost one percent,” explains Jürgen Greiner. Furthermore, the ZF developers have succeeded in once again reducing the internal transmission losses. This is primarily ensured by the new multidisk separation: Additional springs integrated into the multidisk packages of the shift elements ensure that the friction shift elements are almost fully opened and, consequently, cause less drag torque. “Compared to the first 8HP model range, we have reduced the power losses by more than two-thirds with the new generation,” emphasizes Greiner.

Meanwhile, a further innovative function minimizes the creeping torques: A clutch is now fully opened during deceleration and when the vehicle is stationary. “Consequently, it is no longer necessary to ‘brake’ against the drive,” explains Jürgen Greiner. Another positive effect is that the oil pump belonging to the ZF automatic transmission works with a system pressure that has been reduced from 5 to 3.5 bar and, as a result, requires less energy overall.

Furthermore, the objective was to take the changing vibration behavior of the increasingly economical yet, at the same time, more powerful downsizing units into account. Therefore, all 8HP automatic transmissions feature particularly advanced torsional vibration dampers: These dampers eliminate the vibrations that occur on the engine side in a particularly effective manner so that they are unable to move further along and into the driveline and the body. The newly developed torque converter contributes to downspeeding because the hydrodynamic transmission of power can be bridged even more quickly – this enables traveling with a closed lock-up clutch at an early stage and at an extremely low engine speed.

The tailored, fuel-efficient uncoupling of the transmission in connection with a temporary engine stop, the so-called coasting function, is now possible at speeds up to 160 km/h. At the other end of the speed scale, ZF has further optimized the optional start/stop function of the 8HP: After the vehicle has come to a stop, it stops the engine without any discernible delay – instead of after 1.5 seconds as was previously the case.

However, dynamics is not neglected despite the great fuel-saving potential: Amongst other things, the new transmission control unit enables nested multiple downshifts which permits the 8HP to respond in an even more spontaneous and dynamic manner where necessary.

The display and control concept

The driver-focused cockpit of the new BMW M5 now has an even clearer layout courtesy of the lowered instrument panel with freestanding Control Display. The M-style instrument cluster featuring two classical circular dials and red needles also accommodates an additional digital speedometer on the left-hand side, while the rev counter on the right includes a variable rpm pre-warning field and sporty shift lights when the Head-Up Display is switched on.

In the center of the instrument cluster, the driver will find the readouts for the gear selection, Drivelogic shift program, M xDrive mode and M1/M2 set-up, plus the drive and suspension settings currently engaged. When the Head-Up Display is activated, key information can be projected onto the windscreen so it appears in the driver’s immediate field of view.

The graphics of the M view option developed for dynamic driving have been completely revised and M view now also allows navigation information to be displayed, if desired. The projection area of the Head-Up Display in the new BMW M5 has increased in size by around 70 per cent.

Controlling the transmission is the integrated transmission control unit. The TCU works directly with ZF’s electronic valve body, also known as the Mechatronics. The valve body is the mechanical piece responsible for actuating shift changes and shift points.

The ZF 8HP45 and its updates can be found in several BMWs, a couple of Chryslers, the V6 Ram 1500, a few Dodges, and several Jaguars. Here’s a complete list of vehicles that use the ZF 8HP45/50:

When the 8HP45 debuted in 2009, it immediately became the class of the field. The new gearbox was explicitly built with efficiency and emissions in mind. The writing was on the wall for internal combustion engines with increasingly strict emissions standards, so the 8HP was to be the benchmark.

The other thing you might have to contend with is a failing Mechatronic sleeve. Each vehicle using the ZF 8-speed is going to have an external computer sending and receiving signals from the transmission to relay that information to the other computers in the vehicle.

The 8-speed uses an external transmission fluid cooler to help keep the transmission running smoothly during extraneous operation, such as heavy traffic or a high-performance situation. The inlet and outlet on the transmission for the cooler use standard o-rings to seal their connections.

The 8HP45/50 may only be rated to just under 400 lb-ft of torque, but ZF’s other 8-speeds, like the 8HP70, can hold significantly more. Swapping from an 8HP45 to 8HP70 is possible and has been done before in BMW’s 3-series. It requires a new flywheel, recoded TCU, the 8HP70, and some other supporting bits but gives you an OE-spec transmission capable of holding twice the advertised power of the 8HP45. Any more torque than that, though, and you might want to consider other options.

The easiest way to beef up your 8HP45/50 is with an upgrade package, like those offered by Pure Drivetrain Solutions. They offer four different packages; the weakest rated at 750 lb-ft and the strongest capable of over 1200 lb-ft of torque.

Each transmission is fully disassembled and features stronger clutches, stronger seals, and a few modified internal pieces. The strongest gearboxes also receive shafts, hubs, and baskets made from billet aluminum. The N55 or B58 engines mated to the 8HP are capable of some serious power; these transmission upgrades will ensure their reliability and longevity.